Plan your trip and travel to Fukushima with peace of mind by understanding the latest situation in the eastern parts of Fukushima, affected by the 2011 earthquake.

Learn about how Fukushima as a whole has recovered over time and is thriving as a tourism destination in its own right.

Background to the disaster

At 2:46 pm on March 11, 2011, a magnitude-9 earthquake struck off the Pacific Coast of Japan's Tohoku region, causing a powerful and deadly tsunami that inflicted widespread damage along the coast. The tsunami triggered by the Great East Japan Earthquake, as it is officially known, caused meltdowns at three reactors in the Fukushima Daiichi Nuclear Power Station complex. This nuclear disaster led to the evacuation of over 150,000 people, and has had long-lasting impacts on many industries including agriculture and tourism.

Fukushima was one of the worst-affected prefectures, but over the intervening years, it has managed to make bold steps towards prefecture-wide revitalization, due to the resilience and courage of its people. The prefecture flourishes now thanks to visitors - both domestic and from overseas - flocking to experience the natural beauty, history, and culture of Fukushima.

Map of the Restricted Entry Zone

Tracking the change over time

See how the restricted entry zone to the east of Fukushima Prefecture has evolved over time. 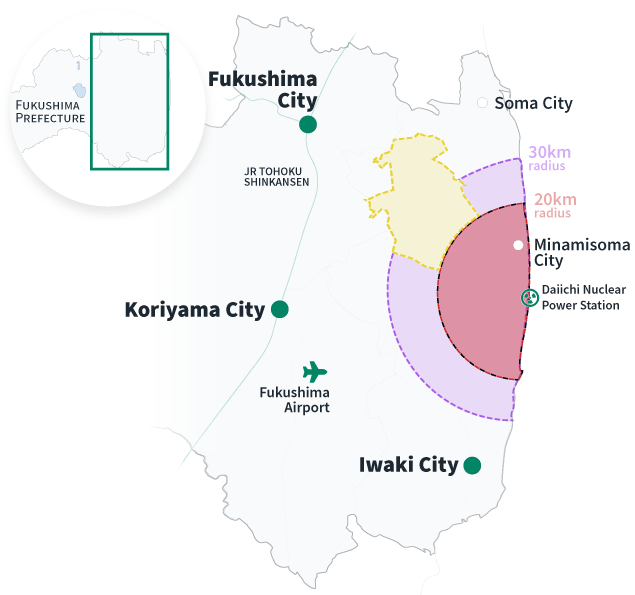 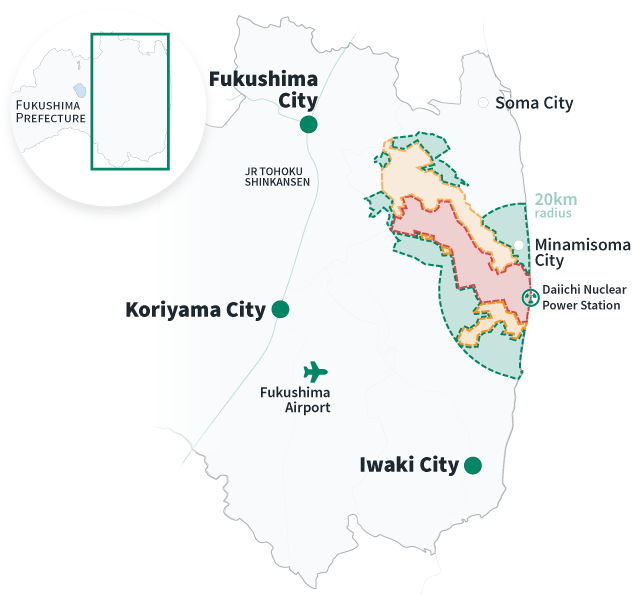 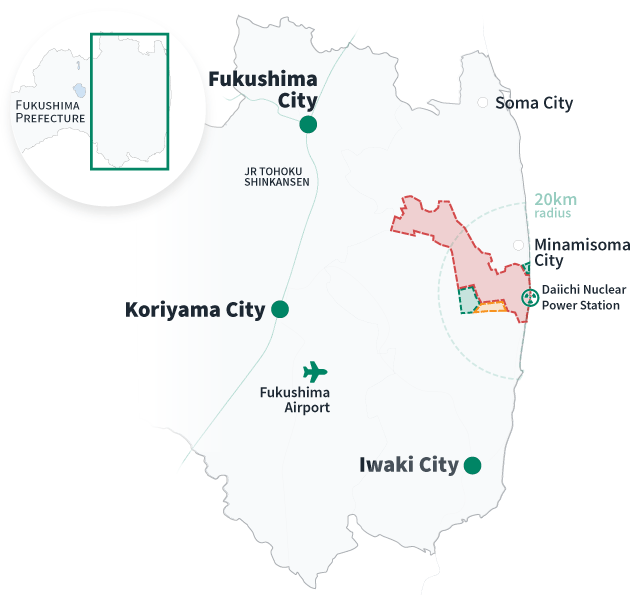 The landscape in eastern Fukushima has changed remarkably over time since the original disaster. The outline here serves to highlight the prefecture's efforts to date and how things have changed since 2011.

3:36 pm Hydrogen explosion at Reactor No. 1 of Fukushima Daiichi NPS

Hydrogen explosion at Reactor No. 3 of Fukushima Daiichi NPS

Hydrogen explosion at Reactor No. 4 of Fukushima Daiichi NPS

Approximately 3,600 monitoring posts have been set up in schools, parks, and other public facilities throughout Fukushima Prefecture. These display radiation levels at that location, and every 10 minutes, automatically transmit collected data wirelessly to a server, providing an 24-hour monitoring system.

This included the monitoring of foods and materials for agricultural production, and restricting the distribution of food with high radiation levels than permitted standards.

Achieving a cold shutdown means that the reactors have been brought to a stable state.

"Difficult-to-Return to Area", "Areas Preparing to Have Evacuation Orders Lifted", and "Habitation Restriction Area". Read more (PDF, 1.9MB) about the changes in areas under evacuation orders.

Cars allowed to pass through Difficult-to-Return Zone (via Route 6).

Removal of all spent fuel from Unit 4 of Fukushima Daiichi NPS complete.

Facilities open to develop technology to be used in decommissioning work.

Naraha Center for Remote Control Technology Development was built to develop remote-controllable machinery and devices for use in the decommissioning process.

This facility was built for storing soil and waste removed during the decontamination process. More info (PDF, 1.3MB)

All planned decontamination outside of the Difficult-to-Return Area completed.

Area under evacuation shrinks to less than 2.7% of the whole prefecture.

This includes taking out fuel debris, and removal of the remaining spent fuel. The decommissioning process is expected to take around 40 years. (PDF, 1MB)

Fukushima's recovery can be seen in the increasing number of visitors to the region over the years. The number of international accommodation guests, has confidently climbed year-on-year since 2011 reflecting the fact that Fukushima is open for business and welcoming to all. Source: JTA (Japan Tourism Agency)

What are the average radiation levels around Fukushima?

Approximately 3,600 monitoring posts have been set up in schools, parks, and other public facilities throughout Fukushima Prefecture. These display radiation levels at that location, and every 10 minutes, automatically transmit collected data wirelessly to a server, providing an 24-hour monitoring system.

How do radiation levels compare to the rest of the world?

Radiation levels at major cities around the world.

Are agricultural products from Fukushima safe to eat?

Agricultural products from Fukushima Prefecture must meet the world's strictest safety standards before being put on the shelves. Necessary measures are in place to ensure that foods are not distributed to market if found to have exceeded strict limits. Fukushima Prefecture conducts repeated inspections on all primary and processed food products produced in the prefecture at each stage, from production through to distribution in order to ensure their safety.

Is water in Fukushima safe to drink?

Water in Fukushima is monitored to the world's strictest standard. The water is naturally filtered by the land, as well as through commercial filtering. Water quality is ensured to meet safety standard through regular monitoring, which has shown that there have been no detectable amounts of radioactive cesium or radioactive iodine in tap water since May, 2011.

Can I visit the exclusion zone?

Rather than there being an "Exclusion Zone", the area of Fukushima Prefecture that is subject to access restrictions is referred to as the "Difficult-to-Return Zone". This area takes up approximately 2.7% of the whole prefecture. While it is possible to drive through parts of the Difficult-to-Return Zone, visits to the area are generally limited to those who have received written permission from the head of the relevant administrative body, or those visiting as part of a tour.

Such tours include those run as part of Hope Tourism, which is a new type of tourism centered around Fukushima Prefecture’s unique experience dealing with the disasters of March 2011.

What the experts say

"Extensive decontamination, monitoring, and regulations have made food from around Fukushima perfectly safe." WIRED (Interview with Dr Sae Ochi), Mar 2015