Suzutake workshop tours began in the 1950s as a way of providing families with a chance to learn about the history and artistry of lacquerware. Even today, visitors are able to actually see artisans at work at three key stages of the Aizu lacquerware making process: 1) applying a base layer of unrefined lacquer or astringent liquid to wood; 2) adding additional layers of lacquer in a desired style, and 3) adding hand-drawn delicate designs ('makie') using either colored lacquer or gold and silver power (a technique called 'Sunken gold makie'). Visitors can also take part in a makie-painting experience. 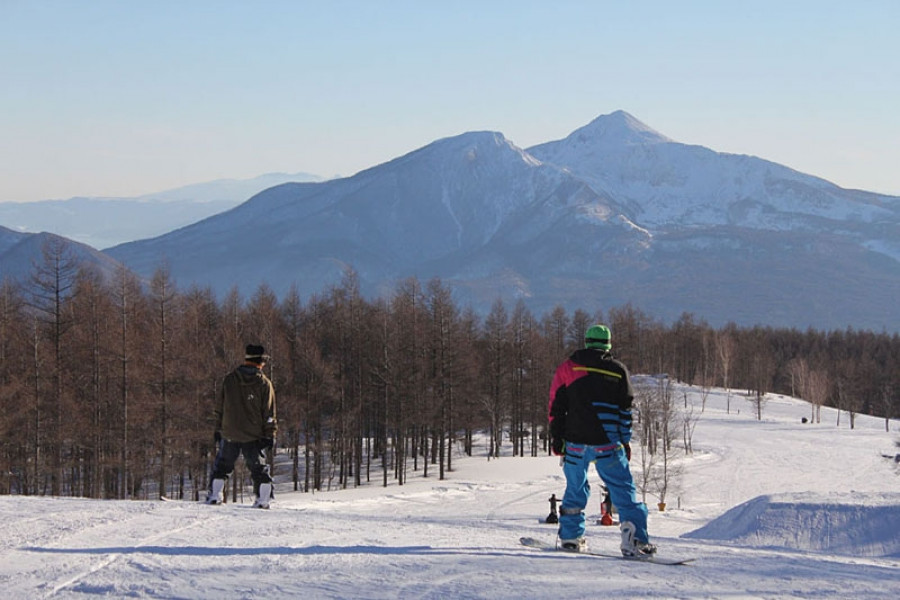 Grandeco Resort is located in the scenic Urabandai area. The base area of the slopes sits at an altitude of more than 1,000 m, which enables skiers to enjoy great powder snow from late November through early May. A gondola and 4 high-speed quad lifts with hoods make skiing more convenient. Even beginners can go up to the top on the gondola and enjoy skiing down the long 3,500 m-long course, the upper part of which runs through wild beech woodland. 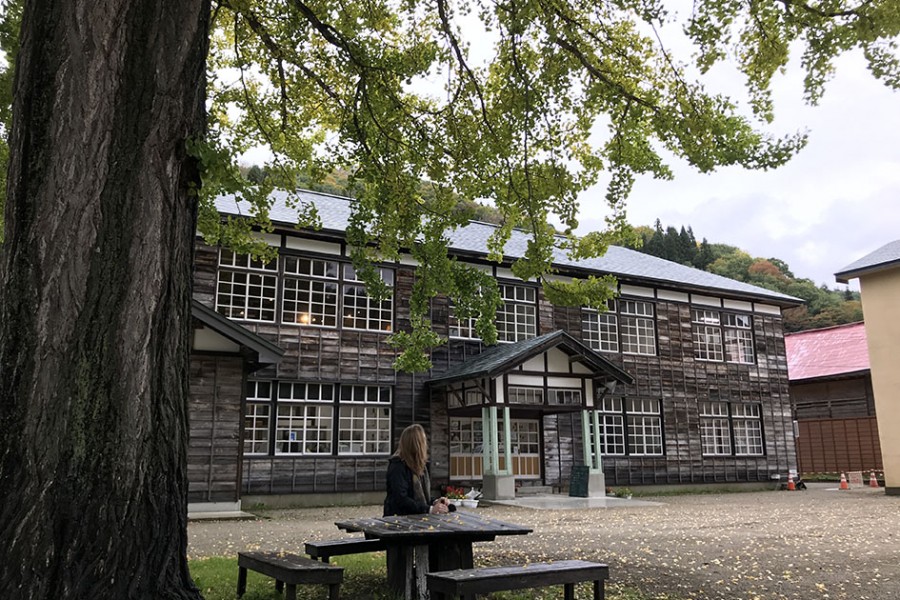 Kuimaru Elementary School is a historic Japanese school that was built during the Showa era of Japan, making it over 80 years old! In the 1980s, a modern elementary school was built nearby, leaving this old school house abandoned. Fortunately, this building was preserved and converted into a museum. It happens to be one of only a handful of old fashioned schools left standing in Japan! Here you can explore the old school grounds including a large ginkgo tree that is over 100 years old. A long standing symbol of the school. In Autumn (early to mid-November) the leaves turn a beautiful golden yellow, and when they fall, the school yard is carpeted in these golden leaves. The school building has undergone some light renovations, but the charm of this old building has been beautifully preserved. Inside the building you can wander through the halls and explore the classrooms, you can sit at the little wooden desks, page through some old textbooks and imagine what it would have been like to be a student here around 80 years ago! Fun fact: The school building was once used as a filming location for the 2013 movie Hameln (ハーメルン). After you explore the school if you are feeling a bit hungry, there is a café next door called “Soba Café SCHOLA” that serves 100% buckwheat noodles (soba noodles) as well as other dishes created with 100% buckwheat (soba) flour. These dishes are naturally gluten-free and delicious. 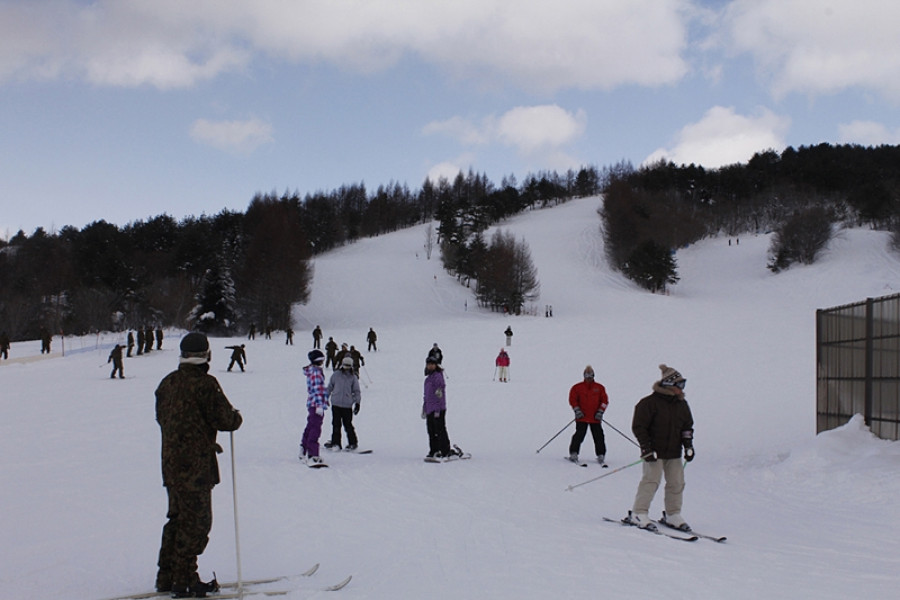 A ski area located on Mt. Adatara, Ski & Snowboard Park Numajiri offers superb enjoyment for everybody from beginners to advanced skiers, with fourteen courses and an extremely rich variety of terrain. The Kids' Area is great fun for children and is sure to put a big smile on their faces. 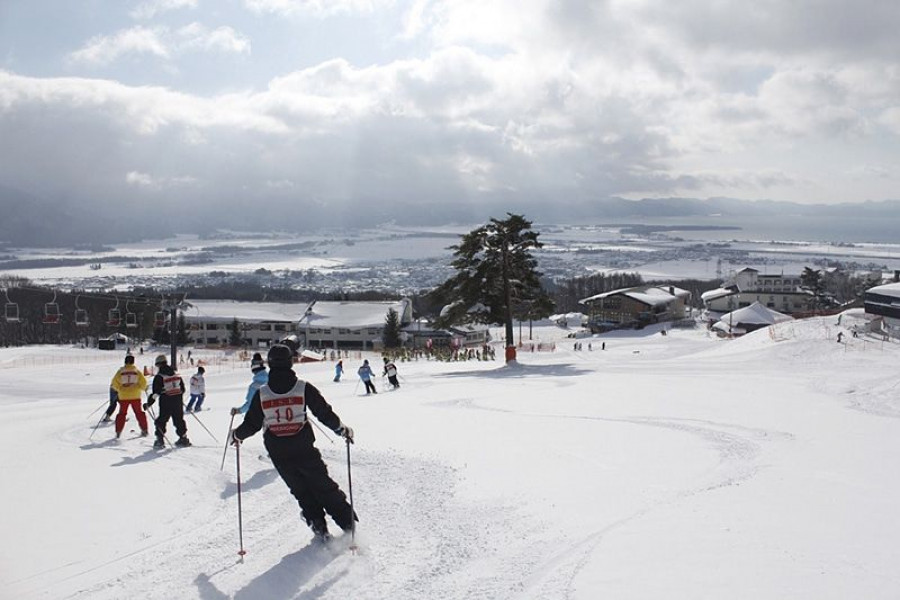 Thought to have had its sloped 'designed for Fukushima locals', Inawashiro Snow Paradise offers 17 courses across 2 expansive areas, each tailored around a different skiing style. Its convenient access is also a major draw for tourists. 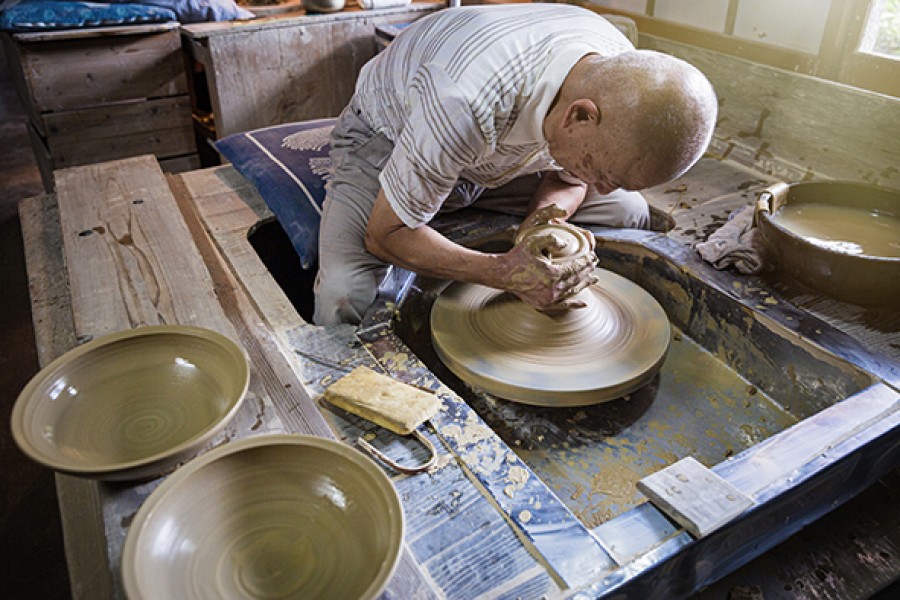 A little-known treasure, Aizu Hongo pottery (known in Japanese as 'hongo-yaki') is the oldest type of pottery in the Tohoku region. Aizu Hongo pottery's history dates back to the Warring States Period (1467 – 1615), when Ujisato Gamo, leader of the Aizu clan, ordered renovations be made to Tsurugajo Castle. The production of ceramic tiles for the castle roof kick-started the tradition of making pottery in Aizu-Misato Town. During the early 1600s, Masayuki Hoshina (who founded the Matsudaira house) invited ceramic craftsmen to Aizu-Misato from Owari - a region famous for its pottery - in order to increase the skills of locals. It was from this time that Aizu Hongo-yaki production began in earnest. At the peak of its popularity, there were more than 100 potteries in the town. There are currently 13 left, which are centered around Setomachi in Aizu-Misato. The rich variety of wares produced from workshop to workshop is just one of the fascinating things about visiting the area. Aizu-Misato Town is also known for the area's unusual ability to produce both great-quality earthenware and delicate porcelain. Please enjoy taking a look around the various shops, workshops, and kilns, and try making pottery for yourself! 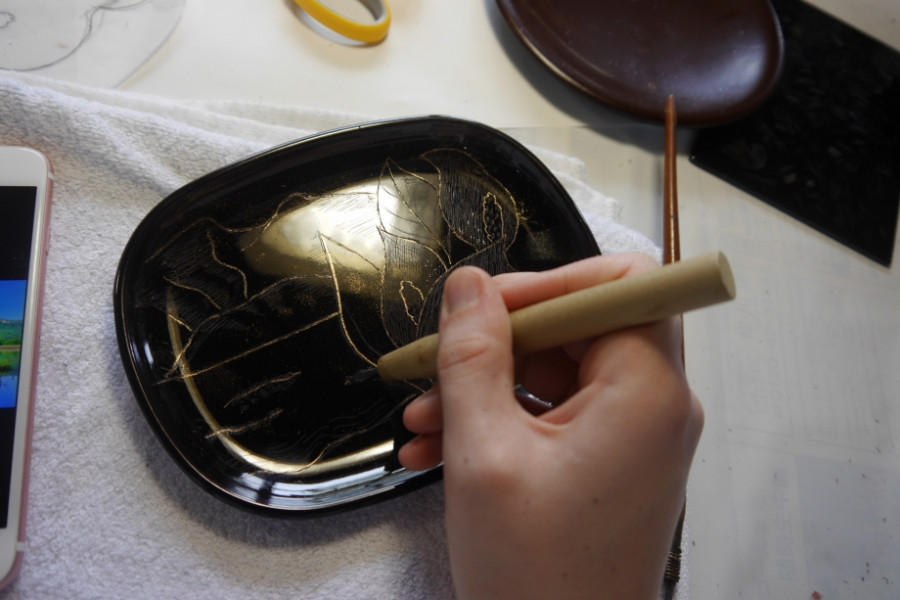 The Tradition of Aizu lacquerware in Fukushima Prefecture has continued for 400 years. Try out creating a design on Aizu Lacquerware with a technique called Chinkin ("Sunken-gold") at Tsunoda Lacquer Art Studio. Sketch your design on tracing paper, and then mark it onto the lacqerware with a needle. Tsunoda san will help you fill the grooves created by your needle with gold and silver powder to create your design. Alternatively, try painting your own design on Aizu lacquerware at the studio. Either experience will create a great souvenir of your trip in Japan. These experiences take about an hour. 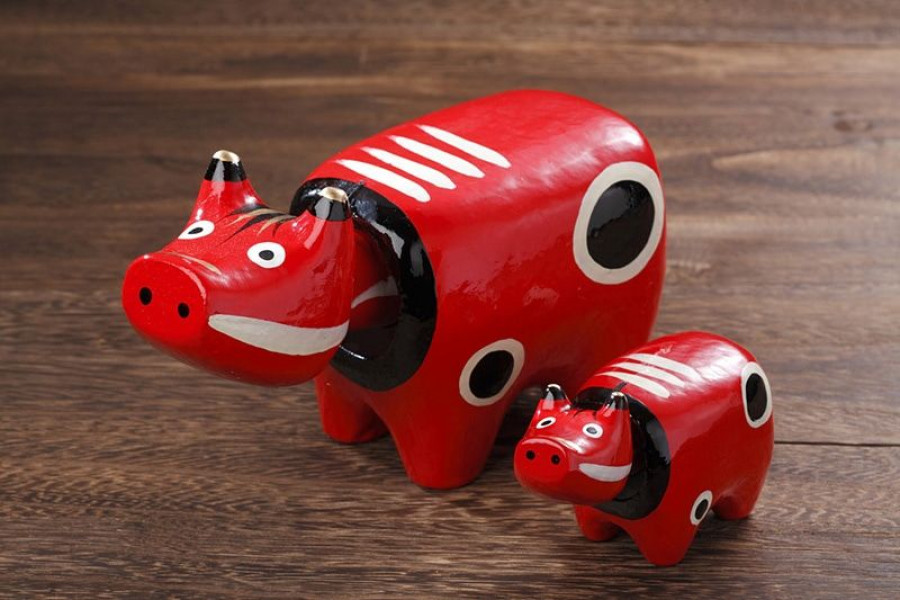 The akabeko legend started at Enzoji Temple in Yanaizu Town, in the Aizu region. The construction of this temple began in the year 807, but due to a huge earthquake at the end of the seventeenth century, repair work begun in 1617. It was during the reconstruction of the temple that the akabeko became a folk legend. It is said that moving the wood and other supplies necessary for the reconstruction work was incredibly difficult, because materials had to be transported from various villages upstream of Tadami River. The materials were heavy and the journey to the temple long. Cattle were used to transport materials, but many struggled to bear their loads. Then, out of nowhere, appeared a cow with a red coat. (It should be noted that, in the past, the word ‘red’ was used to describe the colour ‘brown’, so it is likely that it was a brown cow.) The red cow supported the other cows and helped the priests who were constructing the temple until it was completed. Then, it suddenly vanished. A number of statues of the cow were built inside the temple grounds so that the people of Yanaizu could express their gratitude to the akabeko. In the years following, there were a range of legends about the akabeko, with stories such as families who owned akabeko being rid of sickness upon stroking the cows. They continued to hold their status of bringers of good luck and strength. Families bought or made akabeko toys for their young children to play with. Akabeko Painting Experiences In recent history, the Aizu tradition of painting akabeko began. It is said that this tradition started as something to do for children visiting Aizu-Wakamatsu City as part of school trips. This was when the story of the Akabeko evolved once more, into its newest papier-mâché form. The stripes on the face and back of the papier-mâché Akabeko are said to represent strength and perseverance. There are a number of workshops in Aizu-Wakamatsu City where you can paint your own Akabeko. Most workshops offer the standard red, white, and black paint. These talismans for good health make very cute and light-weight souvenirs to take home for family and friends – or keep for yourself! Those who prefer to buy a ready-painted Akabeko will be able to find it at most souvenir shops. 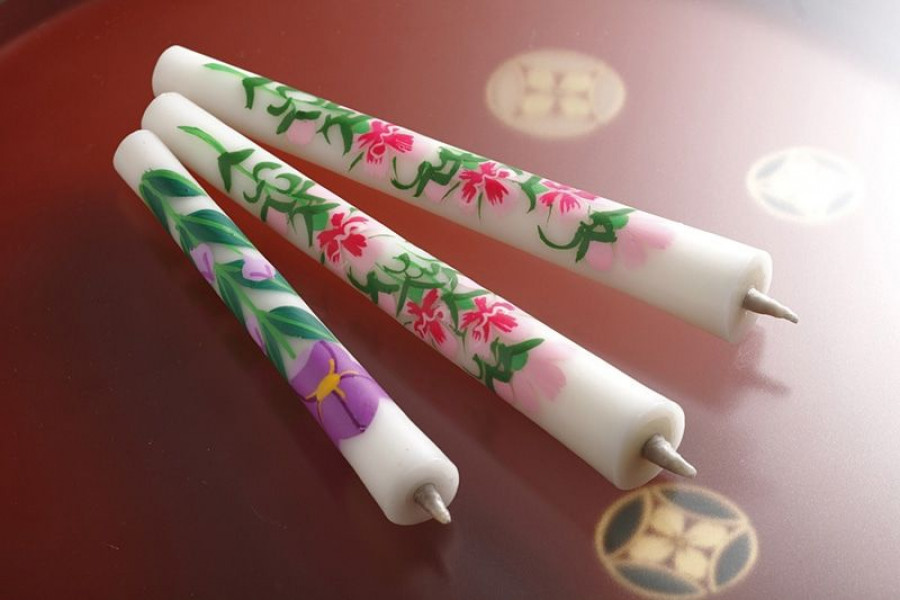 Aizu Erosoku (painted candles) are sumptuous items that were long-prized among samurai families. Delicate and vivid patterns such as chrysanthemums, plum blossoms, and peonies are painted onto candles made of natural Japan wax extracted from the fruits of lacquer trees. Each candle is still painstakingly painted one by one, and they serve as regal decorations in Shinto and Buddhist ceremonies and weddings. A candle painting experience is available at Ozawa Candle Shop (Reservation required).